With respect to National Beer Day, 2016, this blog post focusses on the marriage of 2 economic giants of Oregon industry - Beer and Technology, and how Internet Protocol (IP) Communication has influenced the growth of one of the world’s most iconic craft beer economies.

Oregon is home to over 200 craft breweries, operated by 194 brewing companies. This ranks Oregon 4th in the United States. In 2014, Oregon produced over 1,000,000 barrels of craft beer!

This growing family of craft beer enthusiasts has provided the state of Oregon with an unexpected economic boom. Oregon’s hop crops alone were worth over $35,000,000 in 2014 (http://oregoncraftbeer.org/), and that is just for the first layer of economic prosperity. Once the hops leave the farm they begin a journey of maturation that leaves a trail of entrepreneurialism and prosperity. Not to mention, the trail ends in our collective pint glasses, something us Oregonians love dearly.

Just to shed some light on the breadth of the craft beer seen across Oregon, here is a list of major cities in Oregon and the corresponding number of breweries:

Brewery count by city and region: 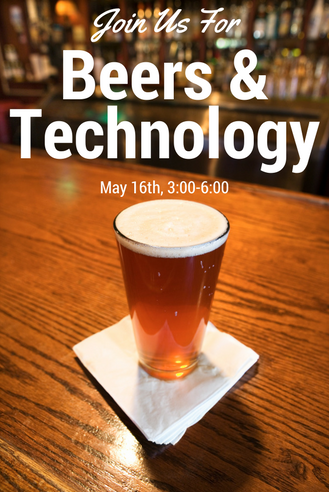 But how has technology played a role in this evolution?

Let’s start with the roots of the relationship, the farm, where crop management software is helping professional growers get real-time views of their farm operation. Modern software is providing this insight on any browser or device: smartphones, tablets, and computers. Best-in-class farmers use software such as Conservis and Cropio for planning, purchasing, planting, harvesting, marketing, inventory control, work orders, and performance reports. Some software is built specifically to make sharing information easier with insurance agents, landowners, lenders, and partners. Enhancing these software applications is backed-up Cloud based data, so that all the information obtained is secure and easily accessible in the Cloud, at all times.

Ok so now the hops, barley, and wheat have been produced, picked, and are in route to the brewing facility. We could stop for a moment and discuss fleet management software, but there are much more important technologies to discuss. From recycling thermal energy during the brewing process to the automation of shipping and packaging, technology has placed its stamp on every element of craft brewing. A recent article published by GeekWire, followed one Director of Brewery Operations on a journey through their 21st century facility and shed some light on how innovations in technologies have not just changed, but revolutionized the way brewers bring beer to market. Throughout his journey the one staple that kept rising to the top was automation: the ability for technology to influence the processes of development in an automated fashion has allowed smaller breweries to operate with larger outputs and join the ranks of mass producers.

Before we get too far down the rabbit hole, let us take a step back and define what separates the various levels of breweries, which is important to understand if we are to digest the various levels of technological impact.  A micro-brewery is defined as a brewery that produces fewer than 15,000 beer barrels annually (www.brewersassociation.org). The Micro-Brewery scene is full of “Craft Brewers,” entrepreneurs of the industry who have risen to the top and made a name for themselves through devotion to their craft. None of that could be possible without the influence of technology.

Ok, we’ve gone from crops to production, but where has technology made its mark when it comes to sales? Microbreweries get their libations to market in one of 3 ways: brewer to wholesaler to retailer to consumer, or brewer acting as wholesaler to retailer to consumer, or possibly directly to the consumer through carry-outs and/or on-site tap-room or restaurant sales. No matter how a beer gets to the pint glass, the challenge is communicating the uniqueness of the beer itself. An innovative solution came in the form of digital reader boards that automate inventory communication, beer descriptions, and even social media into one mountable instrument that has changed the way consumer experience craft beer with every pour. Enter Digital Pour. Walk into any serious tap house in Portland Oregon and you will be certain to see one of these beauties hanging above the bartender. Digital Pour and other services like it are able to not only streamline communications about new beer selections to patrons but also assist with POS management, inventory analytics, and consumption reporting, all elements that are essential to small business owners looking to bring craft beer to the good people of their neighborhood.

Technology has leveled the playing field for brewers of all sizes, allowing them to step out of the shadows of larger competitors and emerge as legitimate, professional organizations. Hosted technology plays a large part in this transition. Cloud based solutions allow small organizations to operate with enterprise grade infrastructure without the burden of large upfront capital investment – a realization that is becoming more common across all industries as organizations see the benefits of treating tech as an operating expense instead of a capital expenditure.

One of Matrix Networks most prestigious customers is The Craft Brewers Alliance, the parent company for notable brands such as Widmer, Redhook, Kona Brewing, Omission, and Square Mile Cider. It is the mission of Matrix to keep the Alliance and all their customers up to speed on the latest and greatest in communication technology. Providing hosted technology is one of Matrix Networks’ specialties. There is an infinite amount of clutter and marketing fluff surrounding technologies that are hosted in the Cloud. Why? Because the solutions are often less hands on than traditional hardware-driven technology, so it is easier to mask a solution’s shortcomings. Our job is to help companies see what should and shouldn’t be a part of their communication ecosystem. If you are a brewery looking to grow your business or any organization looking to leverage hosted technology give Matrix Networks a call. As payback for allowing me that shameless plug, check out this awesome infographic that shows the impact of craft beer on the state of Oregon and click the link to be take to a state by state walk through. 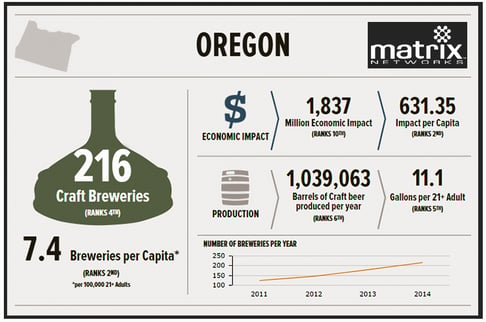