Get off Cruise Control! Introduce Disruptive Technology as Opportunities Emerge

If you were asked a year ago, “What will 2020 be like?” few could imagine the reality. The grim truths of COVID, the protests for racial reckoning, and the most significant economic downturn since the Great Depression would have you guessing the apocalypse had come. Indeed, these are difficult times, but Leo Howell, the CISO at the University of Oregon, highlights the opportunities inherent in such tumultuous times for businesses and IT professionals to introduce disruptive technology and increase buy-in from sometimes reticent stakeholders.

If the recent pandemic has shown us anything, it is that IT can respond – and respond quickly – to change. In only three weeks, Howell and his team at the University of Oregon implemented tools that would normally have taken 6-12 months, such as expanding their VPN capacity, adding Dropbox and Zoom, expanding MS Teams, and implementing telehealth.

Such rapid transition has created a newfound unity among the stakeholders at UO, and there are new opportunities to introduce disruptive technology because of greater tolerance for risk and less expectation to deliver a “perfect” product or service. Stakeholders are more understanding and accepting of less-than-optimal conditions for new tech roll-outs. Such tolerance can be cultivated to introduce much needed disruptive technology, but how can it be done?

The key is flexibility

People want access from wherever they are with whatever device they’re using – what Howell calls UYOD (or “use your own device”). This will require a lot of flexibility from IT, increasing service-side controls instead of pushing them to the end point where users are. But doing so will require his technicians to be mature about adopting more cloud services, which can be tricky. With so much time and effort invested in the existing infrastructure, it is common for IT professionals to fear their jobs and work may become irrelevant as they adopt new tech.

Thus, there is the need to overcome these fears and train IT staff to provision services in the cloud as opposed to “holding on for dear life.” Even small changes in IT infrastructure can lead to disproportionately significant results in flexibility and performance.

However, the need for flexibility is not limited to IT alone. Indeed, Howell suggests that private companies should maximize their current capabilities, suggesting that most companies employ only 50% of their IT functionality. Vendors also should be mindful of this need and modernize what they are selling. Creating modular products, more customization, and the ability to mix and match services will better tailor them to the changing market demands.

How do we get there?

Leaders are trained to bring change to a market, but how can they do it? Howell suggests a model from a highly recommended source: Geoffrey Moore, author of Crossing the Chasm, advises that in order to make radical changes in an organization, it is imperative to understand the various stakeholder groups, what makes them tick, and how to get them across whatever barriers may impede their willingness to embrace change. 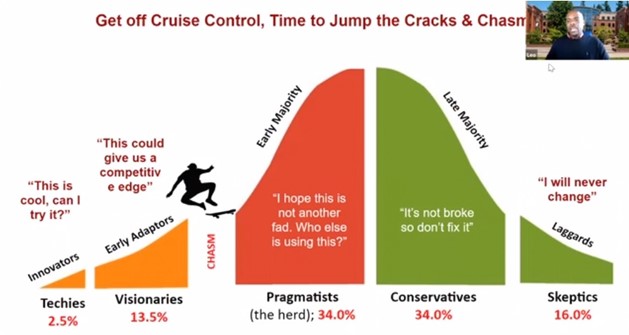 This diagram summarizes Moore’s analysis of the stakeholders involved in most companies. First, the “Techies” and “Visionaries” will most likely support whatever change is suggested by IT as their innate willingness and curiosity enables them to more easily adopt and adapt to technological change. By far the more difficult groups to convince are the “Pragmatists” and “Conservatives,” who may not see change as necessary and who may require references from their counterparts as to the effectiveness of any given proposal.

This requirement poses a “Catch-22,” according to Howell, because no one in the early majority will have adopted the new product or service yet, but they desire someone within their group to vouch for its efficacy.

To overcome this predicament, Howell suggests thinking about it like war: we must create a beachhead first, and then follow up with reinforcements. In this case, with the pandemic affecting nearly all business practices and strategies, IT professionals can promote a single service with a tailored message to each of the various groups, get some of the stakeholders to try it and approve of it, and follow up with fuller proposals or services, coaxing them across the “chasm.”

Change happens all the time, sometimes glacially, sometimes meteorically. During this period of unprecedented change, IT must be the drivers of the new digital economy by committing to flexibility and innovation while the condition persists. Unprecedented times can be frightening, but we must resist the urge to try to conduct business as usual and embrace uncertainty as a catalyst for change.